skip to main | skip to sidebar

Thanks to fellow blogger Intermezzo one does learn a lot of things about opera: for example that opera singer Anna Netrebko was seen in a concert on Monday night with a cream crochet beret - interesting, but the question remains: did she buy it or make it herself? (I found the pix in Ravelry. In case you like this one, it's called the beret gaufre by Veronik Avery)
There have been famous singers who knitted, the singer coming to mind in Kirsten Flagstad (if I remember correctly) who knitted lots of things for all her family in her dressing room. In fact, lots of musicians do. Even famous ones like Midori (acording to the knitting viola player), a fellow knitter.
I have to say that as much as I like knitting almost everywhere, I officially suck at knitting on stage. I tried in our last recital, in which I was supposed to play a person waiting in a waiting room (hence the knitting). I kept knitting back and forth the same row while G. was singing her way through the emboidery aria - a total disaster. I mean my knitting, not the singing. I haven't touched that project since!
We didn't take our knitting on Tuesday night when G. and I went to see Traviata at Covent Garden. G. had to overcome her disappointment when we discoverd in the morning that Dmitry Hvorostovsky wouldn't be able to perform due to illness. I happend to run into the man in question (by accident) in a big department store in London and I can say that he has so much charisma off duty that I was really curious to see him on stage. But no chance here. Instead, we got to see the recovered Mme Netrebko and the German tenor Jonas Kaufmann. If you haven't heard of him, go a do a search on YouTube. He is amazing - and I'm not saying that because I'm rooting for my country here (which of course I am, but he IS really good). As I had a singing lesson today I found out that my singing teacher likes him as well. He showed me his Kaufmann CD with Strauss songs which was neatly packed on top of his bag for his trip up North this afternoon. I took some pictures from our lofty position up under the roof, but they are on my phone. My computer never recognises my mobile, I have to use G's laptop. I'll put them up later today. For more close-up pictures have a look here. 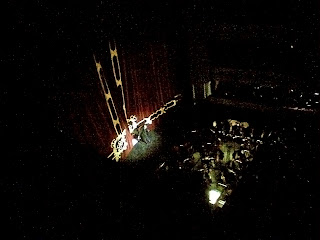 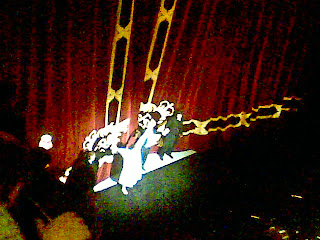 Posted by Tournesol at 3:07 PM No comments: 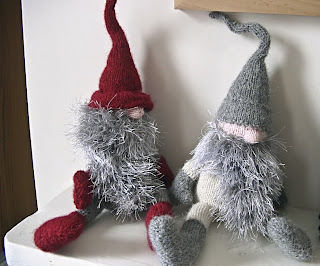 After weeks (and weeks and weeks) without the wool for the Gnome beards, it finally arrived just before Christmas.
Obviously that meant that I wouldn't touch it before January, since there were enough Christmas gifts to knit.

G. finished her Gnome a couple of days ago and mine is complete with beard and beanbag bum since yesterday. I had to take all the pictures twice; the first time there was no card in the camera....
Well, here they are, our Gnomes. 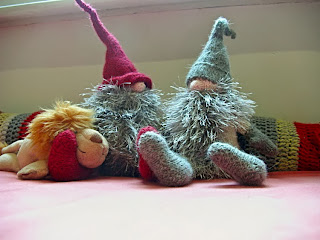 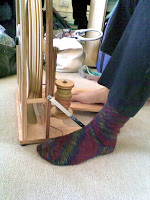 ....hmmm didn't sound too appealing at first. I don't spin. It makes M. think of the whole spinning action in Wagner's Flying Dutchman - and once she has started giving a rendition of all roles and the entire opera, who is to stop her?! Also, despite my love for crafts and knitting, and (almost) all things hand made, I am NOT PATIENT! I can't face having to wash, comb, pull and spin yarn, to then combine threads to twist them into bigger threads.... and all of that before even starting to knit a single loop!

However, D. gave M. and me such a lovely invitation, that we couldn't really say no. We were even allowed to knit while the others spun - AND there were very nice peope as well as sugar-free cinnamon cookies and tea. So, altogether a lovely meeting. I will go so far as to say I love watching others spin and I also like the individual threads that come out of it. It's soothing. But maybe not really for me - how could I finance another fibre habit?! I will simply enjoy meeting up with some lovely people and knit while they spin. Yeah. Although.... maybe I can try just a little....
Posted by Tigerduck at 10:35 AM 3 comments: 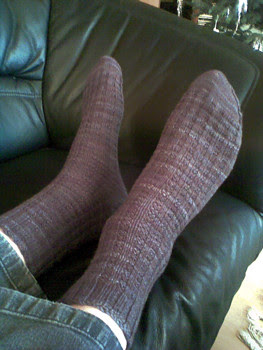 I was finishing so many little projects before Christmas (and during Christmas), that I have to slowly catch up on sharing them with you lovely lot. Some of them haven't yet been photographed, so here is a start with some of the ones that have.
On the left are the socks I knitted from my dad (he was a bit concerned that his feet now appear on the internet.... well, they do!) Made from Dream in Colour Smooshy in Cocoa Kiss. I bought the yarn at the London SnB Day at the lovely and very tempting Socktopus stand. They were a joy to knit despite my dad's biiiiiiiiiiiiiig feet (size 48). The pattern is Harris Tweed by Ali Green. 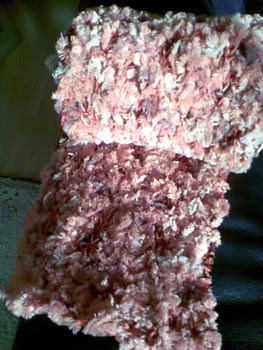 Next one up is a very quick scarf project for my niece L. Very soft (as she is blind, I try to give her texture and things that are lovely to touch). Made from Lana Grossa Favola, simply knitted in "Patent" stitch. As I was sick over Christmas, I couldn't even give it to her yet :-(

Yes, stating the obvious, Christmas is over. Unfortunately, I was sick with the flu all of Christmas and spend most of the holidays in bed with a fairly high fever.... as did M. who visited her parents, as did my mother, whom I was visiting (my dad was sneezing for maybe half a day and that was it, so at least I didn't get the entire family sick). Lots of time for knitting, though, once the fever had subsided.
I am all excited about the beginning of a new year. I like new beginnings and (hopefully positive) change and surprises, and here is a whole new year to go. No new year's resolutions on my part - just to take every opportunity, to be thankful for my friends and family, to help when it is in my power to do so, to make music with passion, and to enjoy life as much as possible - which is not really specific to this new year.

Sooo, for a fun start, have a look at the little creams and custards and the Bohemians' choir in Verdi's Traviata (in the video bar on the right of the blog).

Music, Opera, Knitting, Food - the essentials as far as we are concerned. Sharing our experiences (trials and triumphs) with others makes them more memorable, enjoyable and real. We hope you join us and enjoy the journey...

Drop us a note

Musicians who knit and crochet